Let’s run through a few stats with you. If they don’t make you realize the importance of mobile phone marketing for your business, then I don’t know what will.

The growth in mobile usage over the last few years has been staggering. And the features now available on “smart” phones and other mobile devices such as iPads make mobile the most effective method of marketing!

In the US, over 96% of the population has a mobile phone! In fact, mobile is bigger than Google and Facebook… Combined!

91% of cell phone users keep their phone with them all day long.

97% of text messages sent are read within the first 5 minutes.

73% of mobile phone users actually WANT to receive offers and coupons on their mobiles (most emails with the same offers would end up in the Delete folder!).

95% of SMS text messages are opened and read compared to around 10% of emails!

And TEXT marketing messages have a higher open and read rate than ANY other message delivery system… bar none!

At any given time, 46% of people on social media sites are accessing it through a mobile device.

Google says that 30% of all searches are now made on mobile devices. Given the earlier stat that mobile users are 3 times more likely to buy, you should sit up and take notice!

Hopefully a light bulb has just switched on in your head and you are beginning to see just how powerful a medium mobile is for marketing. If you thought the internet was big, this is set to completely dwarf it. And get this last statistic…

Less than 5% of businesses have used mobile in their marketing strategy!

SMS – Text Marketing. SMS stands for short message service. I absolutely implore you to incorporate SMS text marketing into your marketing campaigns. Why? People who surf the web with their smart phones like to text. And they like to get text coupons and special offers, instantly, right on their cell phones. And if you put a compelling offer such as “Text DOG to 555-555-5555 $20 off your dog’s examination”, or “Text TIRE for buy 3 get one free tire special”, etc., you will see a much higher ROI. I can’t emphasize enough how powerful Mobile Coupons are!

So here’s the marketing plan in a nutshell. Build a mobile version of your site or pay a professional to do it for you. Advertise it on Google Mobile Ads (Adwords).

Put out an offer for a mobile coupon on your site. For example: Text DESERT to 555-555-5555 to get a FREE Desert! Or Text VIP to get on our VIP Discount Program, or Text 20OFF to get 20% off your next purchase, etc. You’re only limited by your imagination. Like getting a mobile version of your site, it is inexpensive to have it set up for you.

In fact I am running a special right now where I will not only build you a mobile site, I will set up a text marketing campaign for you, and even help you set up a Google Mobile Ads account. 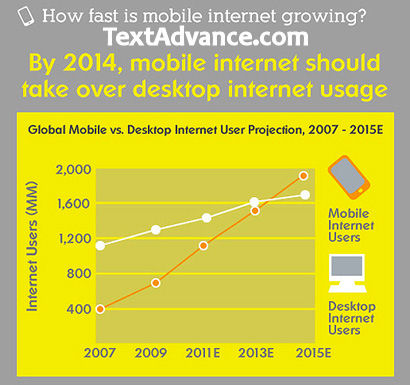 Mobile is bigger than both Google and Facebook combined. 96% of the population already has a mobile phone.

95% of SMS text messages are opened and read compared to around 10% of emails, but most important to you is this one:
73% of mobile phone users actually WANT to receive offers and coupons on their mobiles!

The mobile offer beat out the newspaper ad by a margin of 8 to 1! But what may surprise you is that she paid over $200 for the newspaper ad but less than $40 for the mobile ad! People are bored silly by newspaper coupons (for the most part) yet mobile coupons are the Next Big Thing. NOW is the time to capitalize on that fact because, right this minute, mobile coupons will give you the biggest ROI than ANY other form of advertising. That is not an exaggeration. It is effective. It is dirt cheap. And it is easy to implement.

In fact, SMS Text Marketing is as easy to implement as putting out a poster in front of your business that says Text WHATEVER to 555-555-5555 (you will have a local number). And people walking by WILL text that! Your current customers WILL text that. And now you will be able to follow up, any time you want, by sending out special offers, products, announcements, or anything you prefer, any time you want, all at once to your subscribers. All for just 2 cents each! Compare that to direct mail or print advertising and you will immediately realize the advantage.

Another one of the services I offer is QR codes (included in my mobile marketing package). I will explain a little about what they are in a second, but first an example of how it helped another one of my clients. “Jim” owns a small cafe in a rather large city with tons of competition. So he wanted a low cost way to stand out and get more customers through his door.

So what I did was make him a special QR code and printed it out very large – bright red – as a flyer. All it said was “Scan For A FREE Sundae”, with a big full color picture of the Sundae in question. Nothing else. No address, no phone number. Just that silly looking barcode and the sundae: 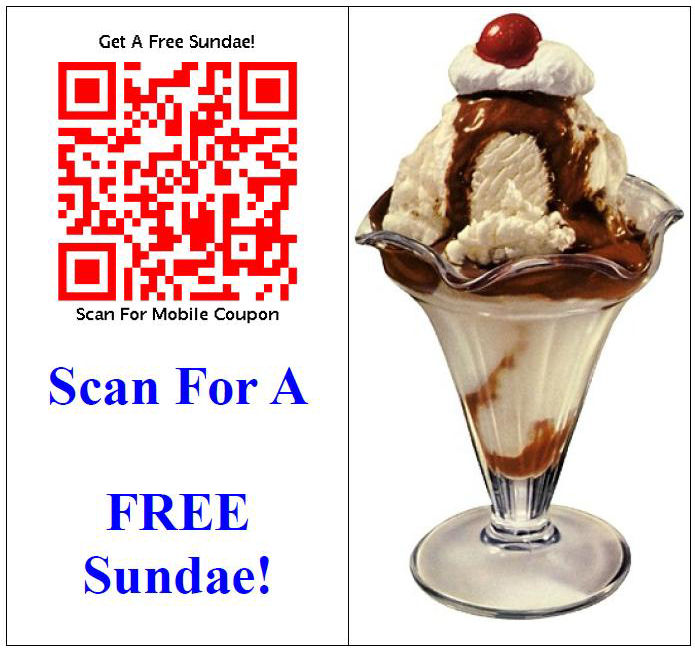 Then he had his son distribute them all around the neighborhood, including stapling to telephone polls and asking fellow merchants if they would place them in their windows. He got 28 people to scan his barcode the first day alone, and over 200 within the next week. He knows this because each customer had to bring in their cell phones and show him the mobile coupon in order to get the free Sundae. Most of those people bought full dinners or lunch so Joe made out very well financially.

Get a step ahead of your competition and implement a mobile marketing strategy right now!